No products in the cart.

Way of Life > South > The Cheesewring

The Cornish coast tends to grab the limelight and certainly the beaches and coves of the county are worthy of attention. But within Cornwall is a wild and weathered landscape that also captures the imagination. Like the rugged texture of an aged Davidstow cheddar, the rock formations crumble with age, showing their weathered beauty over time.

This month I took the chance for some exercise and a sunrise walk upon the moor. The Cheesewring is a granite tor on the eastern flank of Bodmin Moor, just one mile from the village of Minions. With a name like that I had to share this wonderful spot and cook up a recipe worthy of a cold walk in the great outdoors. The natural geological formation or granite slabs is the result of hundreds of years of weather erosion rising to a height of over thirty feet. The name originates from the resemblance to an old press-like device once used to make cheese and the views from the top are simply wonderful. The moor is also home to ponies, sheep and cows with a rich history for common-grazing.

In 1861 Wilkie Collins described the Cheesewring ominously, “if a man dreams of a great pile of stones in a nightmare, he would dream of such a pile as the Cheesewring”. They defy logic, resting slant-angled on a steep hill in a precarious balanced shape, much like the modern trend towards cheese towers instead of a wedding cake, or the latter stages of a game of Jenga. They are located next to Cheesewring Quarry which actually supplied the granite for the cladding of Tower Bridge in London.

Local legend has it that the Cheesewring is the result of a contest between a man and a giant. The giants who lived up on the moor were unhappy when the saints and Christians came to their wild lands and one large giant, Uther was given the task of getting rid of them. Saint Tue proposed a contest if he lost the saints would be banished, should he win and defeat Uther in a test of strength then the giants must convert to Christianity. Uther threw a small rock to the top of the nearby hill. Tue prayed and with the strength of God in him, he picked up a huge slab and, finding it lightweight, threw the rock on top of Uther’s, and so it continued as they threw slab upon slab into a perfect pile. Eventually one of Uther’s rocks tumbled down the hill and Tue won the contest. As a result, the giants decided to follow Christianity after that.

There is another site to take in that’s extremely close by; the Hurlers are located to the west of the village a short walk from the car park. The Hurlers are a unique Bronze Age monument again with a legend of their own. They say that local men were playing a Cornish game on a Sunday and were turned into stone as punishment. As with many ancient stone circles it’s a spot popular with pagan enthusiasts at solstice and for dowsing. This local area also boasts the highest public house in Cornwall that’s well worth a visit and has inspired my Davidstow Cheese & Bacon Scotch Eggs and Cheese & Onion Pie recipe this month. After a walk on the moor it’s always a treat to have some Davidstow cheddar inspired recipes to enjoy at home!

For an energy packed protein snack on the go, these scotch eggs make the ultimate cheesy treat. Bacon, mature cheddar and pungent chive around a rich, runny egg yolk. These gourmet scotch eggs are as at home on the dinner table for a luxurious lunch, or taken out and about in a rucksack on a hiking trip or country walk.

For me nothing beats a humble country pie to deliver winter comfort and robust flavour. Davidstow cheddar provides a real depth of flavour and the mature cheddar works wonderfully with the sweet allium and hint of dry cider. This rustic pie is superb eaten hot or cold.

James Strawbridge is the author of The Artisan Kitchen and Davidstow Cheddar’s Cornish  development chef. 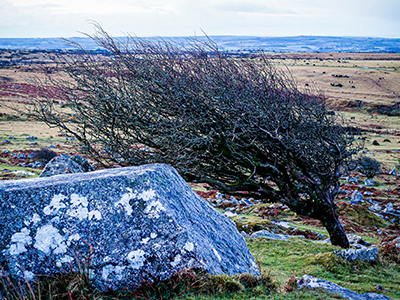 Away from the famous coastline, Cornwall has many other areas worthy of a visit. The aptly named Cheesewring for example, is a granite tor on the eastern flank of Bodmin Moor and offers stunning scenery

We treat your personal data with care, view our privacy notice here.